July
2021
What happens when governments overcorrect during climate emergencies? Who gets left behind?
Photo by
Pudim Raw 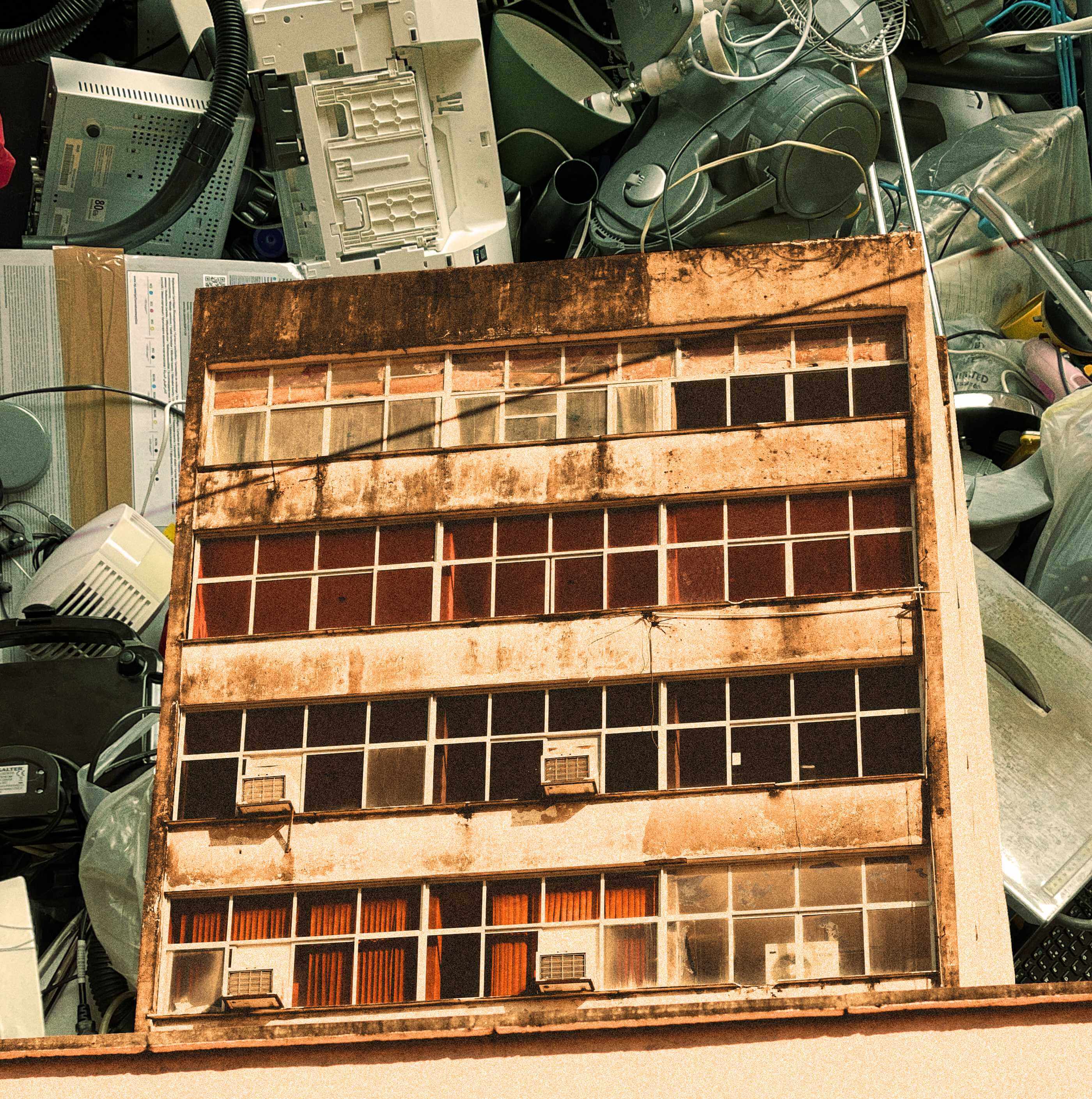 Juli sat alone on her bed, the wind whipping the curtain into the room like a ghost repeatedly attempting to startle her. The heat of the day only disguised by the curtain. It was beyond sweltering, the air thick, like a sopping wet blanket covering her mouth. Breathing was always difficult, fresh air was a luxury. Despite that, more important things beaconed, she was ready to make the decision.

Money was tight. Money was always tight. Juli grew up in a low-income working class home. Her parents split when she was 8 — Dad made child support payments, but eventually even his money couldn’t make life better for Juli, her mom and her little brother. Dad ended up in prison for failing to provide payments. Juli found out through her aunt that Dad killed himself two weeks later. She was devastated, but wasn’t surprised, this is how it was for those who have not. Kids have to grow up so fast.

Juli knew her parents weren’t well — the constant fights about money, about the heat, about food — it was always going to end. Juli’s Dad was a good father. She remembered the second to last time she saw him, he handed her a large box, and inside was a MIDI keyboard. Juli’s father always supported her interest in making music. She cried and hugged him. He told Juli to make him proud — that some day she’d be a big star.

The nation suffered heat wave after heat wave, droughts, flooding, rolling blackouts, food shortages, and the repeated washouts of coastal cities. People moved as far north as they could, pushing up against the Canadian border, crowding the northern states’ largest cities. Most tried to keep going to Canada, but were turned away. Those sleuthy enough to go undetected by the CBSA drones were caught later, either by face recognition, or an inability to stay offline — and were promptly deported.

It was April 10 and tomorrow was NMPD. Western governments banded together in the late 20’s to end the production and sale of new plastics. The aggregate effects of these laws saw a boom in recycling, in reduction of consumer waste, and innovation in packaging design. Mostly positive, except for the poorest people in these zones — plastic used to be the cheapest material to manufacture consumer goods and packaging. Now everything was double or triple the price.

One partial saviour to this new green initiative was the ability to sell plastic goods back into the system. Unfortunately, it was between selling their plastics to shady raw materials dealers, or enduring the long (sometimes days) lines to have their materials assessed and recycled at one of the few regional federally-run recycling facilities.

People initially scoffed at the idea, then it seemed to click all at once just how much of their everyday life is plastic. All their electronics, their appliances, their furniture, clothing, shoes, building materials, and the big one — their vehicle.

At one point, the price of recycled plastic hit an all-time high which spurred a fury of violent vehicle hijackings, break-ins, and  looting. The government had to step in to force emergency pricing regulations on their own recycling centres, however, a black market for plastics had already been built — most likely through the greasing of political palms as to avoid the regulators. Plastic was literally more valuable than gold.

Juli’s apartment was broken into three times. The first, she was not home, and that’s when they took her air conditioner, her TV, and a myriad of other large plastic items. The second time, she was home, and hid in a cabinet while they ransacked the place, opting for smaller items. The last time, she sat on her couch unimpressed as the looters, who looked half her age, turned away when nothing seemed high enough value to grab.

As far as material items go, Juli had very little left. Her government assistance cheques didn’t quite cover rent, and between her three part-time jobs, she scraped just enough to pay for transit and feed herself — should food be available. She had less than $20 in her account at any one time, and should she run out of money the fees for doing so would surely destroy her, as it does everyone else. She was hungry, she needed to stock up on essentials.

Juli’s joy came from watching her brother’s kids. She did not approve of her brother having kids. Why would you bring someone into this world, she thought. But she loved them nonetheless. The kids kept her mind busy, allowed her to teach them music, and provide something better than the awful world outside the window. Being with the kids made time move slower. She could appreciate the little things, how the kids saw the world in which they were given — how they made the best of it. It was something Juli looked forward to.

But, it was that time of the year again. NMPD — No More Plastic Day was a national holiday where, if you could get in line at one of the regional recycling centres, all forfeited plastic items could fetch double the going rate. Removing the panel behind her headboard, she pulled out a box. Juli sat on her bed. She had flush cheeks and welled up eyes. Her heart ached and her throat closed. The curtain kissed her leg, letting the sun scorch her skin for a brief moment before retreating to the window.

She removed the top of the box and held the MIDI keyboard in her hands. It was entirely made of plastic. The case, the keys, the buttons, everything. Could it feed her for a month? Maybe a month and a half if she could stretch it. She wept as she thought of her father. Juli failed him. She wasn’t a star, she couldn’t even make a few bucks teaching the neighbourhood kids.

There were no new pop stars coming from the working class. The rich stole whatever cultural trend came from the streets anyway, then fabricated their own stars. Besides, what good was a damn MIDI keyboard if she didn’t even have a computer? It’s just hunks of plastic.

Standing in line, she felt very uncomfortable. Exposed even. Would someone come to steal the keyboard from her? She was quite far from the centre’s gates where it would be safer under the watchful eye of the law. It didn’t look like looters and thieves were out today, at least not at that centre. She remembered reading a plan to increase surveillance systems within a certain radius of the recycling facilities as workers and delivery vehicles were seeing a greater number of attacks. Perhaps that was enough to keep the petty thieves at bay.

Through the safety of the gates, she found herself in a large, orderly waiting area. Last year a fight broke out and the selling was shut down. Nobody got to sell their plastics. People must’ve remembered this year. The smell was a sort of acrid musk, like old electronics and body odour. People were corralled into lines as they entered. A visual system would detect the plastic, identify the person, then show them on a monitor which line to proceed to. Juli went to line 6A.

As she approached the assessment window, someone behind her started yelling. No no no no, her heart sunk, she was so close. If they shut this down there’s no way she would be able to afford food. An officer in full riot gear approached the man, who immediately stopped yelling. Juli couldn’t hear what was said, but the man’s face turned white. He turned around and left the building. The officer turned back, glancing at Juli through the AR lenses in his helmet. Everyone could tell when they were being eval’d.

Juli Brown. The speaker shouted. She stepped forward and placed the keyboard on the scale. The clerk on the other side of the glass was not visible. Juli figured she had a 50/50 chance of human or algo. The humans were harder to deal with, but if they liked you, the return could be higher. Algo’s  were cold and calculated, no empathy, just face value.

“It was a gift from my dad” she held back tears. The booth was silent. The screen displayed the model: Roland A-49. 5 lb 9 oz, 79% recoverable materials. The price ticker spun — calculating. She looked back at the keyboard. Could she go through with it? Was she finally letting her father go?

That’s… it? She looked up at the faceless booth window. A tear streamed down her cheek. “THAT’S IT?” She screamed. How cliché, everyone screams that. A chime played over her earbuds,

"please remain where you are." She had been marked, an officer was already on the way.