August
2021
Software is eating Hardware and the car is next on the menu.
Photo by 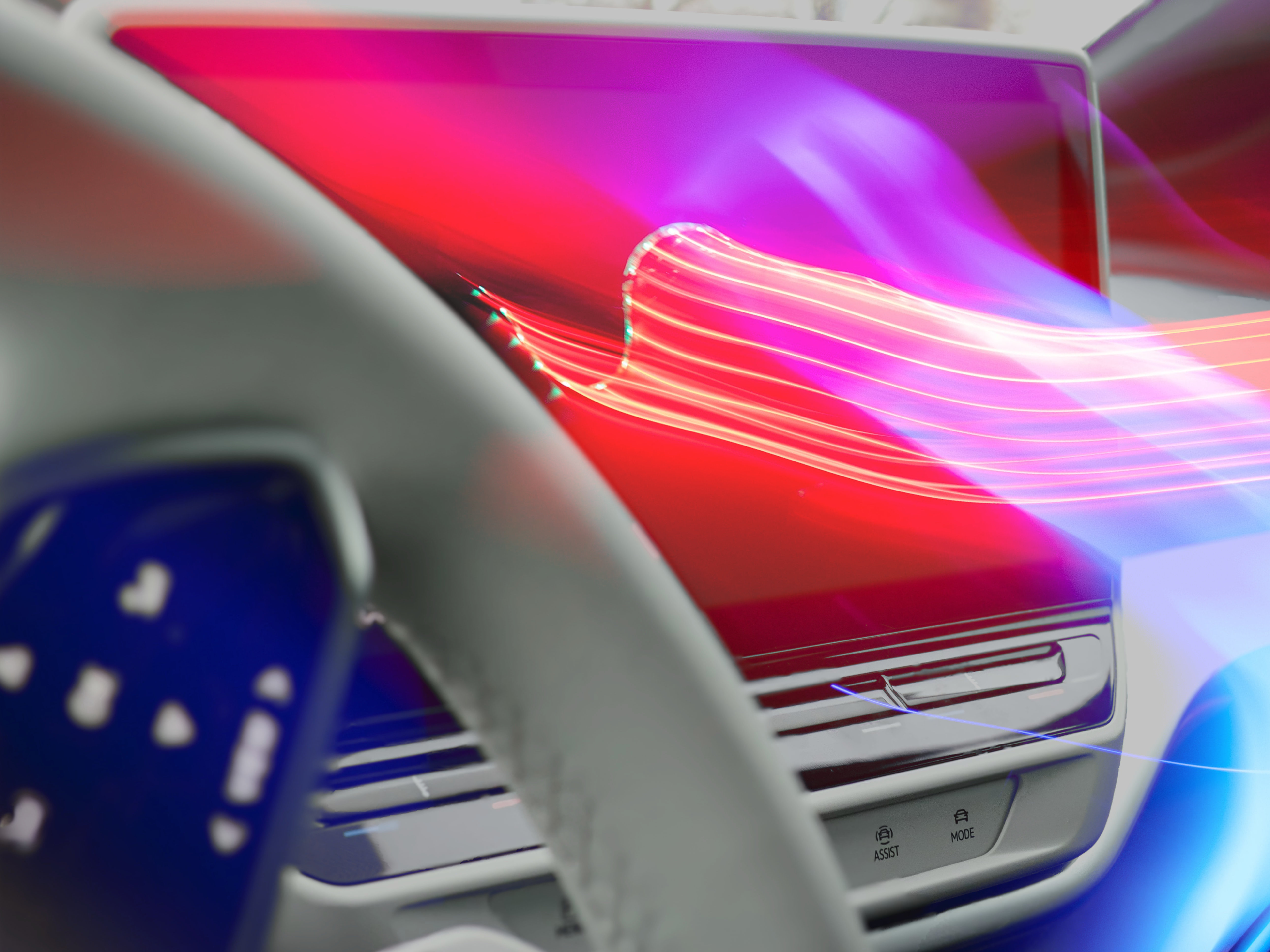 It’s no secret that automakers react to shifts in the social and technological landscape like they are steering a glacier. The advancements we’ve seen in vehicle tech — namely through in-car screens and connectivity — have been tiny hops. We need to see leaps. What we’re seeing now in vehicle infotainment systems, gauge clusters, and connected smartphone applications feels more like a panicked reaction to Tesla.

I’m not going to sugarcoat it — most modern in-car interfaces are bad. While building autointerfaces.com, we got up close and personal with all of the top automaker’s latest interfaces. These in-car systems are at odds with modern touchscreen interaction conventions; lack a cohesive navigational structure; are often confusing to remember where to find certain functionalities; provide minimal value compared to the smartphones in our pockets; don’t flow aesthetically with the rest of the vehicle (ahem, they’re ugly).

It is understandable. Automakers have been honing their mechanical craft for a century or more by building bigger, safer, and more fuel efficient vehicles, with comfortable, luxurious interiors and refined materials tolerances. While great for occupant comfort, there’s been a rise in technology — computer technology that lacks a certain… finesse. I get it, tech is “new”. Software is hard. Modern vehicles now use hundreds of electronic control units (ECUs), each with their own supplier, development team, programming language, and operating system. It’s a logistical and management nightmare for controlling the end-user experience.

For a large portion of the automotive industry, it’s the myriad of independent OEM parts makers that provide code for things like brakes, headlights, or power windows — all using differing conventions, languages, frameworks, etc. Up until recently, automakers didn't have much of an internal capability to build user-facing software, they bought it from an OEM just like every other electronic component. Thankfully, we are starting to see this change. Companies like Volvo and Ford have begun assembling internal teams to tackle big software challenges, and produce customer-facing digital experiences that are starting to feel more modern — more like our smartphones.

Still, it appears these efforts are proving difficult, with mixed reviews, buggy interfaces, and a lack of cutting edge features. As much as I think they should hold on and persevere, for reasons we can only speculate, some automakers are conceding to the software force of nature known as Google. In announcements earlier this year, the likes of Volvo, Ford, GM and others have succumbed to the capital G, stating they will begin using Google’s Android Operating System to run the vehicle and infotainment systems.

This is a good thing, right? No longer do the automakers have to spend hundreds of millions on trying to keep up with basic smartphone functionality, they can go back to focusing on making cars and leave the tech to Google.

Let’s take a look at HTC, LG, HP, Toshiba, Acer, or many other hardware OEMs for Android/Windows in the personal computer space. These are contract hardware manufacturers that have been at the mercy of their software platform overlords for a long time now. Many have walked off the proverbial ledge over the last decade, giving up or shuttering those divisions. The common point of failure is a lack of market traction which is driven by poor differentiation. The end-user experience of these products is the software, so these hardware companies are beholden to the software makers. Attempts at differentiation often amount to costly/bad/never-updated proprietary software, gimmicky add-ons, and bloatware.

Apple, Microsoft and (now) Google don’t have this problem, they can vertically control their products, ensuring maximum component efficiency, interoperability, in order to build valuable ecosystems. Do automakers think the Android-ification of cars won’t happen to them? Do automakers really want to relegate themselves to being another Foxconn to Apple? Software is eating hardware, and the car is next on the menu.

But what about performance? Styling? Interior comfort/luxury? An increasing aspect of the unique car experience is digital, and the most obvious of that being the giant screen at the centre of the interior experience. As even more vehicles are electrified and self-driving’s autonomy level increases, a vehicle’s systems will be entirely mediated by computer technology. This means that more of the driving experience will be automated away, leaving the automaker’s customer less of a driver and more of a consumer of the vehicle’s technology ecosystem.

Letting big tech companies in now only reduces the amount of power and control automakers have over their own customer experience — it’ll be forfeiting hard earned brand value, customer data, and unique selling proposition to the software experiences developed by others, just like OEMs with Android and Windows. “Will this car get the latest Android update?” “Does it come with Apple’s carOS?” What happens when Google or Apple make a decision about the software which is at odds with your vision as an automaker?

Software is a daunting undertaking, but not impossibly hard. Startups and tech companies build easy to use, capable software all the time. It shouldn’t be out of the question that an automaker could set a wild new vision for next generation software experiences in their vehicles and go for it — it just requires the will of the executive/board to do it. What we see out there, even in the most cutting edge prototypes, seems like an extension of what cars used to be, now with a touchscreen. This may rustle some jimmies, but we need to accept that we’re rapidly approaching a point where cars aren’t cars, but rolling immersive connected computing environments — much to the dismay of petrolheads, enthusiasts, and automotive purists.

Automotive execs need to read the writing on the wall and start becoming software companies before it's too late.

How do automakers make this leap? Hire and acquire. The software-focused automaker needs executives who live and breathe tech, those who have built amazing software experiences during the insane boom of the past decade. The software-focused automaker needs as much of a digital transformation as banks, telecoms, and big box retail did. It’s not too late and automakers can do it better. This means (more) investment in software development teams, digital experience design, chip design and manufacturing, and an internal whitespace innovation capability. I think if done successfully, an automaker could turn the digital corner quicker than they think.

The reason I write this is because of my love for cars and my background in design. It’s hard to watch new (like 2022 model year new) cars come out with digital experiences that would fit right in somewhere in 2012. Moreover, the harder our team has examined the interfaces in this industry, the more it’s become increasingly clear that a digitally transformed automaker needs to make this their top priority: The in-car experience needs an operating system.

A VolkswagenOS, a MercedesOS, a JeepOS. Does anybody know the name of the system in the dash of their car? They should. An operating system is built with the underlying opinion of the software maker. It’s the tool people use to access powerful digital experiences, and a digitally transformed automaker should have an opinion on what’s the best experience for their customers. People should know the OS — request the OS. Building a well considered, implemented and maintained operating system allows an automaker to:

It would be akin to building their own iOS or Android. A monumental lift, but one that can be done with a confident future outlook, the right investment, and the will to make it happen. Look at Tesla’s operating system, un-reliant on Apple or Google, providing more than the capabilities of current infotainment systems, and packed with features and a big vision the other automakers simply can’t match. No wonder their stock price is nuts.

If automakers skip the hard work `and go straight to Google, valuable autonomy and unique brand-building software experiences will be forfeited to the Android giant. The customer experience will be entirely driven by the Google-powered software at the heart of the vehicle, and all the customer value will be owned by Google. At that point, what’ll be the difference between a Chevy and a Dodge?